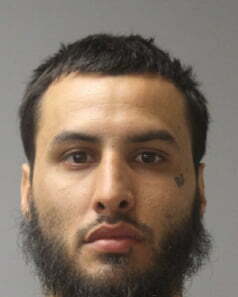 Ocean County Prosecutor Bradley D. Billhimer announced that on January 27, 2021, Elioenai Aguinaga, 32, of Lakewood, pled guilty to Robbery in violation of N.J.S.A. 2C:15-1a(2), before the Honorable Rochelle Gizinski, J.S.C.  At the time of his sentencing on March 24, 2021, the State will be seeking a term of eight years New Jersey State Prison, subject to the terms of the No Early Release Act, N.J.S.A. 2C:43-7.2.

On March 26, 2020, Officers of the Lakewood Township Police Department were summoned to Taylor’s Pharmacy on Madison Avenue for a report of a robbery. Responding Officers learned that a male suspect had entered the pharmacy, brandished a semi-automatic handgun at the store clerk, and demanded money from the cash register. The suspect took approximately $130 and fled the pharmacy.

Prosecutor Billhimer acknowledges the diligence of Assistant Prosecutor Kaitlyn Burke who handled the case on behalf of the State, as well as the hard work and determination exhibited by Officers of the Lakewood Township Police Department and Detective Bureau in their investigation of this matter which ultimately resulted in Aguinaga’s guilty plea.